In March 2001, Andy (also guitarist in The Ex) and I were in Addis Abeba, checking out possibilities for The Ex to play some concerts in Ethiopia. But also to check out other music. There is so much amazing stuff there. One day, in the middle of the Mercato, we were struck by something that we had never heard before. Out of the street speaker of a little cassette shop, flowed a sound that was dark, heavy and serious, but also light, fragile and spiritual. We couldn't quite pin it down. We knew the great Ethiopiques 11 of Alemu Aga, but this was different. Slightly embarrassed at the fact that the shopkeeper had had to take the cassette out of the machine and that the street was suddenly silent, we bought the tape. It turned out to be Zerfu Demissie. In March 2004, we organized a series of concerts in Holland called "An Ethiopian music night". The programme consisted of The Ex + Han Bennink, nine of the greatest Azmaris from Addis and Alemu Aga on the begena. Quite a contrasting line-up! In Ethiopia, the Azmaris and Alemu are from completely opposite sides of the musical spectrum. The Azmaris' music is about drinking, politics, sex, dancing, jokes. Playing the begena, on the other hand, is rooted in meditation, concentration and prayer. Deeply devoted to the Orthodox Christian tradition, Alemu was in his fasting period during the tour, which for him meant an even stronger spiritual commitment and no meat and alcohol. He played his songs and right after, The Ex performed. A very different music from a very different background. But when we were finished, Alemu was there standing at the side of the stage, offering us some cold beers. This is not a rigid religion and culture. This is about people.

We became more and more intrigued by Ethiopian music and culture. We were also intrigued by the begena, an instrument that dates back thousands of years; with its mesmerizing buzzing sound and its special role in the musical, sociological palette. There are the fascinating lyrics, sometimes hundreds of years old and occasionally very contemporary. At times biblical, at other times tapped from different sources. But all including this typical Ethiopian phenomenon known as "Wax 'n' Gold", the subtle poetry with double meaning, which is deciphered as an abstract art form.

This music is unique to this worid. We had to find out more. August 2006, and we were back in Ethiopia. Jeroen took his mobile studio and Emma her camera. We were hoping to find Zerfu to make a recording with him. And we did find him. He agreed to the project, and a few days later, we recorded him in his empty bedroom at home. Beautiful! Enjoy the sounds within! Terrie Ex - Wormer, November 2007 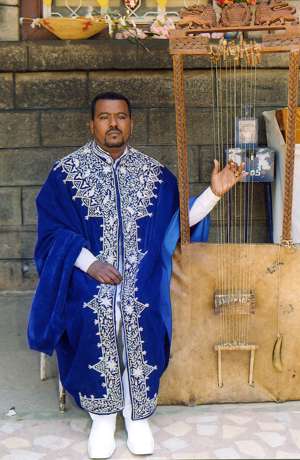 Mixed and Mastered by Jeroen Visser at the Fishing Bakery Labs, Zurich, Switzerland.