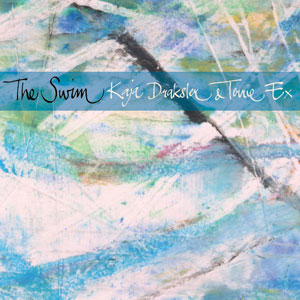 Let’s start by addressing the elephant in the room: this combination of musicians hardly makes sense. On paper, at least. Even though both Kaja Draksler and Terrie Ex are experienced improvisers, their methods and characters are so different that a sensible merger of their considerable forces seems out of the question. But then you realize that entire scenes and band catalogs were built on nonsensical premises. Don’t they say that opposites attract?

Extremes can also cancel each other out and lead to something entirely new and thrilling. That’s exactly what happens here. What you need above all, is a kinship. Mutual trust. Something that starts before you step on a stage. Witnessing Draksler and Hessels together, before and after a concert, it was obvious they felt at ease with each other. Different ages and personalities, but somehow compatible. That is a huge bonus if you commit yourself to creative interaction. This performance offers proof that in improvised music, expectations can be turned upside down and creativity comes in many disguises.

Over the past few years, pianist Kaja Draksler has turned into one of the consistently interesting musicians of her generation. Before her recent move to Copenhagen, she became a crucial member of the Amsterdam scene and she remains one on the international platform. With her own Octet, or musicians like Susana Santos Silva and Onno Govaert, she always manages to impress with her quick thinking, versatility, and a rich language that combines the (free) jazz tradition with elements from (contemporary) classical music and folk with a casual aplomb. Draksler retains her elegance even during dizzyingly complex interaction.

Quite a contrast with rough-hewn Terrie Ex, an unpredictable force of nature, with an angular and frenetic body language to match his musical personality. Armed with a battered, 40 year-old Guild S-300 and some tools (a drum stick, knife, some gaffer tape and basically anything else within reach), Ex is always rooted in the here and now. He is a one-man guerilla army with the enthusiasm of a wide-eyed kid in a candy store, a dadaist sense of humour, wicked dance moves and a striking openness. Restrictions are not even taken into consideration, which makes him an impossible opponent if you are unable (or unwilling) to go along, but an ideal sidekick if you decide to go with the flow.

And so it goes. Far from a trip full of explosive power, this performance is a celebration of textural possibilities, with instruments as sound generators, used to create manically rotating movements, imitate clattering pots and pans, creaking floors, buzzing radio static (how appropriate, that cell phone interference) and exotic animals. Sounds flail around, are thrown around to be disregarded, dismantled and reassembled again, turned into a shower of musical drops, with a minimalist sparseness that can switch to quick runs and jumpy intervals in the blink of an eye. Everything becomes malleable. And if you thought that the formally schooled Draksler would have a hard time to keep up with a musical anarchist like her partner: think again.

The pianist uses every object, idea and technique at her disposal to match the radical freedom of her colleague. She muffles the ‘natural’ sound of her keys, dives into the instrument’s interior to extend/manipulate its possibilities, and even becomes a percussionist. And when she finally returns to the keyboard’s more conventional sounds, the impact is twice as effective. It is a stunningly creative vocabulary that turns that ingenious construction of wood and metal (and a kazoo) into an imagination machine. Is it beautiful? Can you hum along? Probably not, but listen carefully and you might hear the sound of liberation.

There is no explicit form, no traditional harmony to be found, and if you should find it, it was probably unintentional. Yet at the same time, there’s an unmistakable alchemy at work here - spiky and subversive - that is as refreshing as a piano sonata, as thrilling as the repetitive punk that Ex started playing before Draksler was even born. In the hands of born improvisers like these two, concepts such as age, nationality and background become irrelevant. Above all, it is about connection and its amazing, intoxicating potential. The Swim has a story to tell. — Guy Peters 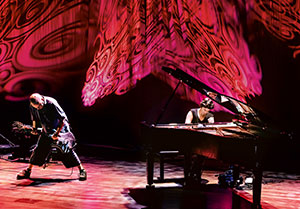 All music by Terrie Hessels (Buma) and Kaja Draksler (Buma).