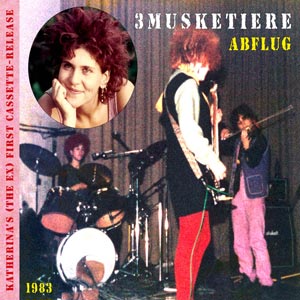 It’s funny how we met Kat. When Sabien, the drummer we had before, left at the end of 1984 to go and live in France, we were looking for another possible player. Kat just moved to Amsterdam and had contact with the Wanda’s, a girl-band she saw a few times and met at a self-defence course in music-club Octopus. She left her contact, just in case. The coincidence was that the Wanda’s singer, Jose, lived in the same squat as GW Sok, The Ex’s singer at that time. So, to make the story short, I phoned her and asked if she would want to play with us, without even hearing her play. There was a lot possible these days! But, there were also two other girls who wanted to play the drums with us. So weirdly enough we held an audition. The first one had played in a circus before and during our Ex riffs she played the same circus rolls as she was used too. Was funny, but didn’t really work... The second was a hardcore girl. Her heavy punk cliche rhythms didn’t work either. Then Kat came in and it worked in a second! We were amazed. Such a unique style! It was very funny that she never saw The Ex, nor ever heard about us. Even when she worked behind the bar of the Tetterode squat, where we rehearsed. Now she’s in the band for some 35 years! Still with the most unexpected, rolling, swinging, totally original rhythms.

We’re very happy to release these 3Musketiere recordings. Amazing to hear her completely own style in the very early stages, but already fully recognisable as ‘Katherina-rhythms’! - Terrie (The Ex) 2019.

All songs by 3Musketiere.
Recorded May 1983 in the Emmaus rehearsal cellar, Stuttgart.
Originally released as a cassette in 1983.