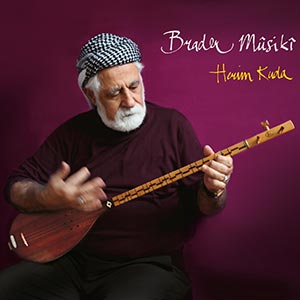 The first connection of The Ex with the Kurdish singer Brader Mûsikî was in 1991 when we asked him, after seeing him play, for the ‘6.Series’, a series of very diverse 7” singles. Brader with The Ex as backing band became “6.2“: “Millîtan” and “Cemê Rynê”, plus a booklet with extensive Kurdish history. Between ’91 and ’93 we did some concerts together. An amazing experience! And, apart from the concerts, he took us to Newroz (Kurdish new year) celebrations. We learned a lot about the amazing Kurdish culture, food, hospitality and music.

Then, after more than 25 years, we met again. Both after crazy busy periods. Brader playing, painting, acting and writing. The Ex playing all over the planet and releasing some 20 CDs. Socially it felt like yesterday. Eating together, telling history and listening to music.

Discovering all of Brader’s recent activities was intriguing: playing in the Kurdish part of Turkey and Syria a lot, recording in Aleppo, playing for 100,000 people in Iraq, an appearance on Turkish TV as a big orchestra leader, acting in Dutch and other films, writing a poetry book, painting!

How come people in Holland and abroad know so little about this phenomenon? And why was there no CD around? We had to do it!

Brader had a large amount of home recordings and he, Emma and I made a selection. Then we translated the lyrics and found out some personal history. Brader gave a lot of photos covering his whole life. Arnold did the mastering. And here is the result: the music and background give an incredible depth. There are ancient Kurdish stories but also recent comments. Very poetic, lots of double meanings, deep feelings of oppression; clear and intense. Standing up against the cruel injustice, giving hope and strength to the unique Kurdish culture and people. — Terrie Ex, Wormer. March 2020 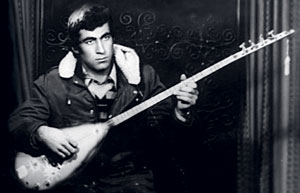 Artwork and layout by Emma Fischer.

Research and text by Terrie Ex.